The MW:M21 conference welcomed back attendees, whereby three public venues buzzed with excitement and activity, and a global online audience hopped between dozens of streams from real-world and online-only stages. “Change” was the spark that initiated all of the sessions: experts from all over the globe led panels, debates, workshops, and discussions – all designed to initiate actions that build a more positive future for the music industry.

“We had around 2,000 registered participants over the three days on-site at the Kulturbrauerei and online across the various events. 1,300 users used the digital conference platform, which is an increas 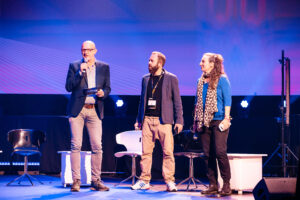 e of over 30% compared to last year. In addition, there are those who used our freely accessible offerings on YouTube and Facebook. The renewed increase in the number of users for both our offline and online offerings shows that the hybrid nature of the event was well received. However, only the future will show how much hybrid events will still prevail after the pandemic hopefully ends soon”, Most Wanted: Music director Stephan Hengst summed up.

In his opening speech, Olaf Kretschmar, CEO and Chairman of the Berlin Music Commission reflected: “During the pandemic, the industry has learned to organise itself better, to close long-standing rifts and to come together to position itself as one industry. We must continue to do so, because this is the only way we can build up the necessary pressure on politics to support the important socio-political changes in our sector as well.” In addition to further education and discourse, the conference therefore serves above all as a platform to bring together the various players in the sector – musicians, scientists and decision-makers. The fact that this was physically possible again after 18 challenging months also shaped the spirit of the event.

HIGHLIGHTS – Impact: the most consequential ideas

The conference began with an inspirational keynote talk from Michela Magas, Innovation Advisor to the European Commission, who passionately demonstrated how music, creativity and technological innovation unite in the music industry: “music is our social glue, and the diversity of our community is paramount. Whenever we’re asked what will happen we always say, ‘we don’t predict the future… we invent it.’

Music generated by non-humans will have positive effects on a human level, argued Rihanna and Kanye West producer Keyon Christ, who is excited by the societal possibilities prompted by “hearing the diversity of ethnic voices on something AI-generated,” during his work with the Dadabots AI collective. “What happens when we can mix together voices from a variety of continents?” He also teased the results of the collaboration: “We’re super-focused on creating the future of sound… I can’t wait for you guys to hear it.”

Any changes in how artists generate money are profound, and direct-to-fan relationships are quietly revolutionary. In a session dissecting independent artists’ income streams, Mike Darlington, CEO of Monstercat, said that, “it might be controversial, but record labels are not necessary any more – you can build the community and the audience yourself.”

MW:M’s innovation-focused programme Hybrid Music Lab discussed the complexities of generating new music with AI. Copyright lawyer Sari Depreeuw explained how AI music posed some tricky legal and philosophical questions: “if the composition has been generated by an AI and is not protected under copyright, then humans performing that song may have no performance rights either.”

Back on the main stage, a unique hybrid musical performance took place. “We focus on the interaction between the body, fabric, sound and machine,” explained the SoundFolds project’s Giorgia Petri. A quartet of musicians wearing clothing containing embedded sensors performed nuanced music, and their movements – plus those of performance artist Melissa Wedekind – were translated into sounds, allowing the musicians to perform with added layers of sonic possibility.

New technologies are changing how we consume and make music, for instance immersive audio technologies, which provide a richer music experience. Bettina Engelmann, Senior Music Editor & Label Relations Manager at TIDAL, which has embraced the Dolby Atmos format, said it allows fans a new way to get closer to artists.

The “Amplifying BIPOC Voices in the Music Industry” session found the panel in agreement: actions are still not speaking louder than words. Christine Kakaire of Black Artist Database warned against being “distracted by performative messages,” suggesting we ask instead, “what are the actions taking place? That’s where the change happens.” Femi Oyewole of Black Brown Berlin agreed, saying it was vital to challenge creative and music businesses whose messaging does not match their actual diversity.

The decentralising effects of NFTs are often expressed in financial terms, but Michail Stangl of the open-source NFT/Web3 protocol Zora expressed excitement about the societal effects of a Web3 “solidarity economy,” which could bring fairer representation within the resulting ecosystem. Back in the Hybrid Music Lab, award-winning musician Terra Naomi – also community manager at NFT platform Async Art – explained how by re-releasing her hit song “Say It’s Possible” as an NFT, she, “generated more revenue in one week than Universal Music made from it in 15 years.” 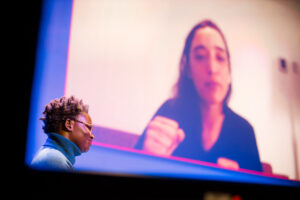 In the closing keynote, highly respected DJ Sama’ Abdulhadi reflected on her life in techno and the powerful communities in it, saying: “Techno has always been about standing with minorities.” Sama’ celebrated the peace that these communities have fostered: “We live in this crazy world, but when you go to a festival it is another reality. People are pure and you feel comfortable in a free space. That should be what the world is like.”

MW:M Live, the listen to berlin: Awards, and Satellite events

Elsewhere, MW:M Live concerts showcased up-and-coming artists across three stages, including avant-garde Belgian hip-hop quintet Glauque, the bold and poetic hip-hop of Caxxianne, and Joplyn, whose blend of modern Berlin sounds and emotive melodies has caught the attention of tastemakers and music fans alike. The MW:M21 partner county Lower Saxony presented a great selection of up-and-coming artists. Magical moments resulted from the band MODESHA, who made their live debut at MW:M, and the Ottolien brothers, who captivated the audience with great artistic quality. The listen to berlin: Awards celebrated the boldest individuals in Berlin’s music industry, including the collective Freak de L’Afrique, who work on bringing African club music to the forefront, the Music Declares Emergency Campaign for their fight for more sustainability in the music business, and German Techno pioneer Anja Schneider. The MW:M Satellite partner events all over Berlin allowed attendees to experience demonstrations and workshops to augment learning and cement new relationships.